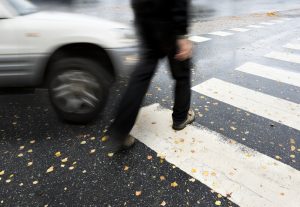 Pedestrian knocked over by car at crossing

The woman, who was a pedestrian, was crossing the zebra crossing after traffic lights turned red.  The driver of the car that hit her put his foot on the accelerator, rather than the brake, of his automatic car, and hit the woman.  She was thrown 20 feet and rolled over the bonnet of another car.  She sustained serious injuries including a shattered tibia. The driver of the car, and another pedestrian, died as a result of the accident.

Belinda took up the woman’s case and pursued the driver’s insurers, who initially defended the claim on the basis that the driver had suffered a heart attack which had caused the accident.  Belinda attended the driver’s inquest, where it was determined that the accident was indeed a simple accident rather than a result of the driver’s many health issues or the heart attack.  The woman was taken to Cambridge University Hospital where she received attention. She had to take time off work to recuperate. Orthopaedic and psychological experts were instructed as well as a shoulder specialist and a counsellor.  The woman suffered significant distress as a result of the accident, particularly as her husband, who suffered from Alzheimer’s disease, had to be taken into a home as she could not care for him.

The case was made particularly difficult as the woman, whilst a UK national, is Italian speaking, and so Belinda had to take instructions via her English-speaking daughter.

Belinda negotiated settlement for pedestrian knocked over by car

The insurers conceded liability and, following several months of negotiation, Belinda was able to agree a settlement of £150,000, gross of CRU, and the woman was happy with the settlement.

If you have been injured as a driver, passenger or pedestrian and would like to know if you are entitled to claim compensation, contact our experts now and we will arrange a free of charge meeting in which we can discuss your case.  Pedestrians can also find out more about claiming compensation for road traffic accidents on our web site.