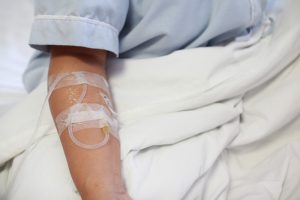 After the first two sessions of chemotherapy, in which the cannulas were inserted into his left arm, Mr B attended Weston Park Hospital for the third session.  On this occasion, it was agreed that the cannula would be inserted into the right arm, as Mr B’s left arm was sore.

A nurse made multiple attempts to insert the cannula.  Once it was inserted, she covered Mr B’s right arm with a heated blanket, which remained in place whilst the infusion was running.  After about one hour and 50 minutes, Mr B felt pain in his right arm and informed a nurse.  This nurse confirmed that Mr B had suffered extravasation, which on this occasion was leakage of the intravenously infused chemotherapy fluid, Oxaliplatin, into the tissue of the right arm.

Mr B was admitted to hospital and had to stay overnight.  He was discharged the following day with a referral for a follow-up appointment with plastic surgeons a few days later. At this appointment, Mr B was prescribed anti-biotics, but the affected area was not fully washed out.  At a further follow-up appointment a few days later, the area in which the cannula had been inserted was reddened and tender and Mr B was suffering altered sensation in his hand.  The redness got worse over the next few days and Mr B’s condition deteriorated.  He continued to suffer from neuropathic pain for which he was prescribed drugs to treat nerve pain. 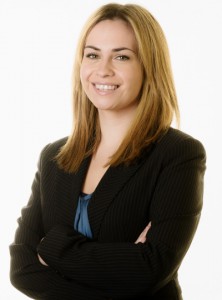 Unhappy with the standard of care that he had received, Mr B contacted Graysons to see if he could claim compensation and Nikki took up the case.  Nikki contacted the Sheffield Teaching Hospitals NHS Foundation Trust claiming breach of duty.  The trust admitted breach of duty in that no record was made of the infusion process.  It also admitted that once the extravasation was identified, plastic surgeons failed to perform a full washout of the forearm and that had they done so, the extravasation injury could have been avoided.  The trust made two offers to settle the claim, the highest amount being £72,000 – an amount they did not wish to increase.  However, as a skilled negotiator, and after a claim had been issued to court, Nikki was able to settle the case for £110,000.

If you have suffered substandard care from any medical professional and would like to know if you can claim compensation, please contact our clinical negligence experts now.  We will arrange a free of charge meeting in which we can discuss your individual case and advise on the best way forward.  If we can take on your case, we will handle it on a no win, no fee basis. You can also find out more on our web pages.