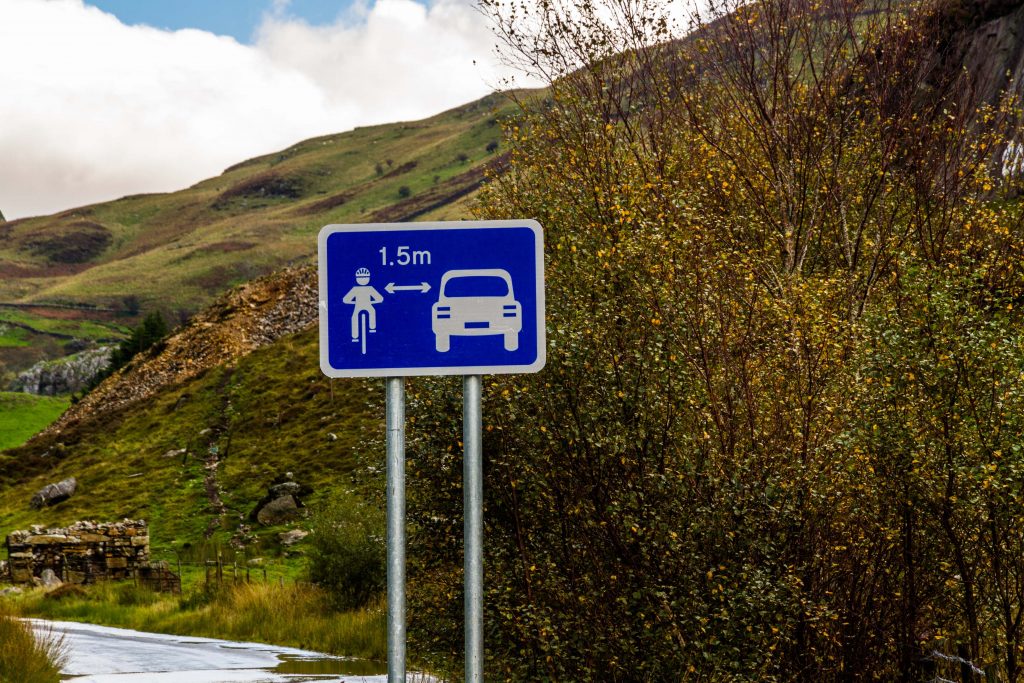 The new rules make it clear that only pedestrians (including users or wheelchairs and mobility scooters) can use the pavement, whereas pedestrians can use a cycle path unless there is a road sign that prohibits this.  Also, cyclists must give way to pedestrians who are using a shared cycle path.

The new Highway Code gives guidance on safe distances and speeds for motorists (including motorcyclists) passing other road users. The rules say that drivers and riders should:

If a cyclist or horse rider is travelling at less than 10 MPH, you may cross a double white line if necessary and the road is clear.

The new rules also say that a cyclist may pass slower moving or stationary traffic (on their left or their right) but must be cautious as the driver of any such vehicle may not be able to see them.  However, the guidance says that cyclists should only pass stationary or slow-moving large vehicles on the left.

As well as offering other guidance to cyclists to make their use of the road safer, the new Highway Code makes it clear that cyclists can ride two abreast, and that it can be safer to do so, particularly when riding in large groups or when one of the cyclists is a child or inexperienced rider.

Other guidance makes it clear who has priority at, and how to use, junctions.  For example, it says that drivers and motorcyclists must not cut across cyclists when changing direction or lane or turning into or out of a junction – cyclists have priority when going straight on at a junction.  The cyclist does not have to be using a cycle lane or cycle track, they can simply be using the same road as the motorist.  Motorists should stop and wait for a safe gap when cyclists are:

The new Highway Code also clarifies that cyclists should give way to pedestrians who are crossing or waiting to cross when the cyclist turns into or out of a side road.

The code encourages cyclists to use the new small, eye-level traffic lights present at some junctions that allow cyclists to move before or separately from other traffic – where that use makes the journey safer and easier. Where there are no such facilities, cyclists should proceed as other traffic and, to avoid being overtaken where this would be dangerous, should:

Cyclists are advised how to use marked two-stage right-hand turns that are present at some junctions.  To use these properly, they should:

Cyclists, horse riders and horse-drawn vehicles have always been able to stay in the left-hand lane of a roundabout when going across or continuing around it.  The new guidance makes it clear that drivers and motorcyclists should:

The new Highway Code recommends that inexperienced horse riders, or those who have not ridden for a while, consider taking the Ride Safe Award from the British Horse Society.

Are the rules legally enforceable?

The Highway Code is meant to keep the highway safe for all users, but not following its guidance does not necessarily mean that the law has been broken. Some of the rules are backed up by law – such as giving way to pedestrians already on a zebra crossing, but the majority of the code is guidance.  You can find information on the new Highway Code and the laws to which it relates on the government website.

Not heeding the guidance, however, does not mean that road users who cause accidents are protected from the law.  Compensation claims are still possible, even though they are somewhat more difficult for car users these days.  However, most of the new rules and guidance offer further protection to vulnerable road users, such as pedestrians, cyclists, motorcyclists and horse riders.  These road users are exempt from the provisions of the Civil Liability Act 2018, which raised the small claims limit for road traffic accident-related injuries from £1,000 to £5,000 in May 2021.  This means that these road users should still be able to access legal advice and assistance.   Graysons’ personal injury experts have many years’ experience of dealing with road traffic accident claims and have won thousands of pounds in compensation for clients.  Contact our team now.