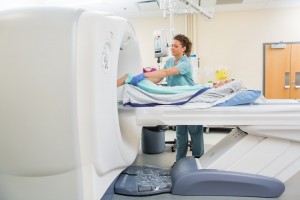 The lady, known as Ms H from herein, was very active and enjoyed taking her dogs for regular, long walks.  Whilst out walking one day, Ms H, aged 53 at the time, got a small bramble thorn stuck in calf.  She didn’t notice it until a few days later when she felt the irritation.  She removed the thorn but an ulcer developed around it.  Her GP treated the ulcer with a silver treatment and honey and it reduced in size.  When she went on holiday later she used antibiotic plasters and the ulcer seemed to go, leaving a tiny white scar.

When Ms H went out walking a couple of months later, her new walking boots chafed and seemed to trigger the return of the ulcer.  Around a year after the incident, the ulcer was about the size of a 5p.  Her GP and nurses tried a variety of treatments over next few months but nothing worked.  The pain started to get worse, and was excruciating after applying honey dressing.  She was referred to a dermatologist at Chesterfield Royal Hospital, when the ulcer was about 6 inches x 2 inches in size.  It was deep and contained fluid.  She was dismissed from the dermatologist and told to use Betnovate, hydrogen peroxide and pressure bandages.   Later that evening, after applying the dressing, Ms H noticed blood pouring down leg.  She went to A & E, but after waiting for 3 hours, without being seen, she went home.

Delay in diagnosing cancer for 2 years

After just over 2 years the ulcer had become much worse and Ms H went back to Chesterfield Royal Hospital.  She was told a biopsy was needed but before she had it she found blood spurting out of her leg in 3 places whilst out walking her dogs.  An ambulance took her to hospital and a biopsy showed cancer in the leg. Ms H was told she needed debridement (removal of dead, damaged or infected tissue) and a skin graft at Northern General Hospital.  Ms H lost a significant amount of flesh and muscle during the operation.

Ultrasound investigation also found 3 cancerous lymph nodes her groin that had to be removed.  She was left with significant scarring from the top of her right leg to her navel and lymphedema in her leg.

Radiotherapy treatment commenced but had to stop as the burns on Ms H’s leg too severe.  She was also left with lumpiness to leg, and consultants were unable to tell whether it was scar tissue or further cancer – which may have necessitated a partial leg amputation.    Fortunately, further tests showed it was not cancer.

Shadow of former life after delay in diagnosing cancer

As a result of delays in diagnosing the cancer, Ms H’s life is a shadow of what it was, and her family’s lives have been turned upside down too.  The emotional trauma of the events will affect her and her family for the rest of their lives.  She has been looked after by her children, who have had to take on adult responsibilities in caring for their mum. Ms H has been severely affected in many ways.  For example, she now:

Knowing that the treatment she had received had not been acceptable, Ms H contacted Graysons for help and Graysons took up her case.  We pursued Chesterfield Royal Hospital NHS Foundation Trust, Derbyshire Community Health Services Trust and 2 GPs for negligent treatment and delay in diagnosing cancer.  All 4 defendants admitted liability, but the 2 GPs only made limited admissions on causation, saying that by the time they could have made the diagnosis, she would have needed extensive surgery anyway.

Medical experts have confirmed that, had Ms H been referred to the hospital immediately upon presentation to the GP with the ulcer, it could have been removed completely without the need for post operative radiotherapy and it would therefore have been unlikely that she would have developed the further cancerous lymph nodes or lymphedema.