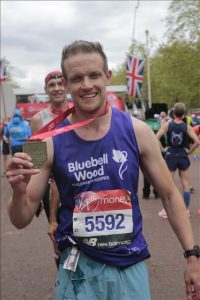 Richard after completing the London Marathon 2019

Running in aid of Bluebell Wood Children’s Hospice, Richard completed his marathon in 3 hours and 15 minutes and raised over £300 for the charity.

Richard is a regular runner, often taking part in 10k events and half marathons, but he has not done a full marathon for around 20 years.  In fact, he was quite surprised that he got a place as it was the first time he had put his name into the ballot.  He was one of only around 17,500 people who were successful out of around 414,000 who put their names into the hat!

He trained for around three months before the marathon – although he says it was a bit haphazard due to minor injuries.  Supported by his family in London on the day, Richard says it was a great experience, although at 24 miles, his legs really did want to give up!

Well done Richard on achieving a great time and supporting such a fabulous cause.