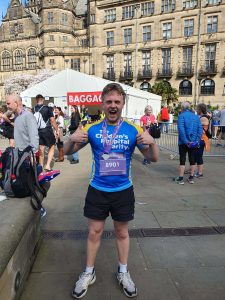 Joshua ran on behalf of Graysons as part of ‘Team Theo’ – a group of more than 200 participants who put on their running shoes for this year’s half marathon to raise money for Sheffield Children’s Hospital.

“The first seven miles were uphill and very difficult – I was in pain! However, the crowds were amazing and helped keep me going.  Thank goodness, the second half was downhill! I wouldn’t really call myself a runner, having only run a few 5k races before, but I’ve been training, and I’m delighted to have completed the run and to have been part of such an amazing fund-raising team that has raised over £20,000 for Sheffield Children’s Hospital.”

There won’t be much time for Joshua to recover, as he will be captaining Graysons’ team of 10 cyclists in this year’s Ride Now which takes place from 10 – 15 May.  The aim is for the team to ride as many kilometres as possible in a week – either on the road, at home or in the gym, raising money for Breast Cancer Awareness.  This is the second year Graysons has taken part in the charity event, and the team hopes to improve on last year’s result – when the team came second in the country, Philippa Smith got the pink jersey for the best performing female and Joshua came second individually in the country. Quite a challenge there team Graysons!