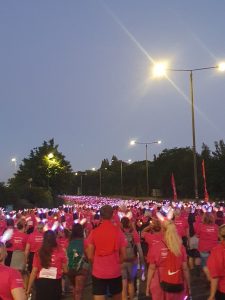 Setting off from Chesterfield Football Club’s ground at Technique Stadium at 10 pm, personal injury specialists Joshua Davies and Robert Burton, and private client advisor, Ellie Bowater, joined around 2,000 people wearing bright pink clothes and sparkly pink ears to walk 10k around the streets of Chesterfield on Saturday 9th July.  The Sparkle Night Walk is one of the hospice’s biggest fund-raising events and is expected to raise around £200,000 for the charity, which provides end-of-life care and support in North Derbyshire.

“What an amazing evening.  Everyone looked spectacular in their bunny ears and pink tops – several with pink tutus, feathers and other pink garb too!  Shops around the route had also joined the fun displaying balloons and other decorations and there was entertainment along the way, including live bands, a UV light station, dancers and a choir.  It is great to be able to contribute to this fantastic charity – and have fun at the same time!”

“From everyone at Ashgate, thank you to every person who turned out to take part in our Sparkle Night Walk and made it such a success.

It’s incredible to see so many people coming together and we were amazed to see over 2,000 people sparkling for their community!” 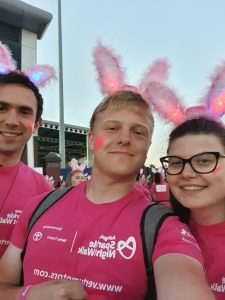 Graysons is a keen supporter of Ashgate Hospice, including sponsoring its Forget-Me-Not event – this year held at Renishaw Hall, providing drop-in clinics to give advice on wills and powers of attorney and participating in fundraising events for the charity such as abseiling at Millers Dale Head.

If you want to support Ashgate Hospice and take part in next year’s walk on Saturday 1st July, registration for the super early bird price of £7 has already opened.  Find out more here www.ashgatehospice.org.uk/sparkle-night-walk